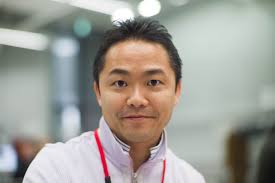 Junichi Masuda (増田 順一 Masuda Jun'ichi, born January 12, 1968) is a Japanese video game composer, director, designer, producer, and programmer best known for his work in the Pokémon franchise. He is a member of the Game Freak board of directors, and has been employed at the company since 1989.[1]

With the development of new Pokémon games, Masuda took new roles in future projects. He began to produce and direct games, starting with Pokémon Ruby and Sapphire, and became responsible for approving new character models. His style seeks to keep games accessible while still adding increasing levels of complexity. His work sticks to older mainstays of the series, including a focus on handheld game consoles and 2D graphics. His music draws inspiration from the work of modern celebrated composers like Dmitri Shostakovich, though he used the Super Mario series as a model of good video game composition. His video game ideas are generally drawn from everyday life and observation.

Masuda has worked at Game Freak since the company's inception in 1989, and has been involved in nearly every title that Game Freak has produced. Masuda was one of the original developers of the Pokémon series, beginning with Pokémon Red and Green. He was first hired to compose video game music, where his first game at Game Freak was Mendel Palace, a 1989 puzzle game for the Nintendo Entertainment System. After Mendel Palace, he worked on Yoshi, the company's first collaboration with Nintendo.

When the company first began releasing Pokémon titles, Masuda worked mainly as the composer, though he did minor programming work as well, and later began directing and producing them. His work on the first games included writing the program to play audio in the games, music, and sound effects. Masuda has been directly involved in the naming and design of many Pokémon. He has stated that one of the hardest aspects of design is making sure that a Pokémon's name and attributes will appeal to a global audience. Since Pokémon Ruby and Sapphire, Masuda has been one of the main employees who approve or reject designs for new Pokémon. He now serves as a member of the Game Freak board of directors.